A few month ago, I accidentally dropped my X100 on the floor. A couple of weeks later, the diopter adjustment control stopped working, but a shake of the camera was enough to put it in the right position so I didn’t bother. A couple of weeks later, my viewfinder curtain started to fail randomly. Since it was getting really annoying, I decided to send the camera to PM2S, the company that take in charge FujiFilm after-sale services in my region.
I had to pay 75€ to get a price quote of 650€. They had to replace the whole lens/sensor/viewfinder module with new parts. They are not competent enough to actually repair stuff: they just replace them with new ones. Since I’m living on a budget, I was stuck with my defective X100.

Last month, after a long road trip, the diopter adjustment locked itself to an extreme correction. It became impossible for me to fix it by shaking the camera like I did before so I had to think about fixing it myself.

This is an illustrated guide that will help you to open the top plate of your FujiFilm X100 camera body, I hope it will help the other people who can’t pay for repair services.

Draw a map for the screws

Step 3: Remove all the highlighted screws.

If you are going further, please document your work, share it online and add it on the comment section of this page. Thanks ! 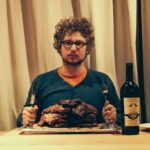